Press enter to begin your search

The Future of Housing, Moving Towards Self-Powered Building

By tndadminMay 20, 2017EV, V2G
The EU zero energy building target might be close at hand as new findings suggest renewable energies and electric cars can work together as power plants, and reduce the need for external energy sources to meet the household energy demand. The house of the future will not need to resort to fossil fuel-based energy systems, but it will rely instead on sustainable design, clean energy technologies, intelligent energy management system and energy efficient building products. Hydrogen fuel cell electric vehicles (FCEV), working as power plants, could integrate the energy supply generated by renewable energies, and help houses meet their energy needs with little grid support. The initial findings come from the research carried out within the Car as Power Plant Project and the Co-evolution of Smart Energy Products and Services (CESEPS) project, in which research teams from both the Netherlands and Austria partnered up to develop new insights into local smart grid pilots and the role played by stakeholders, end-users and smart grid technologies. 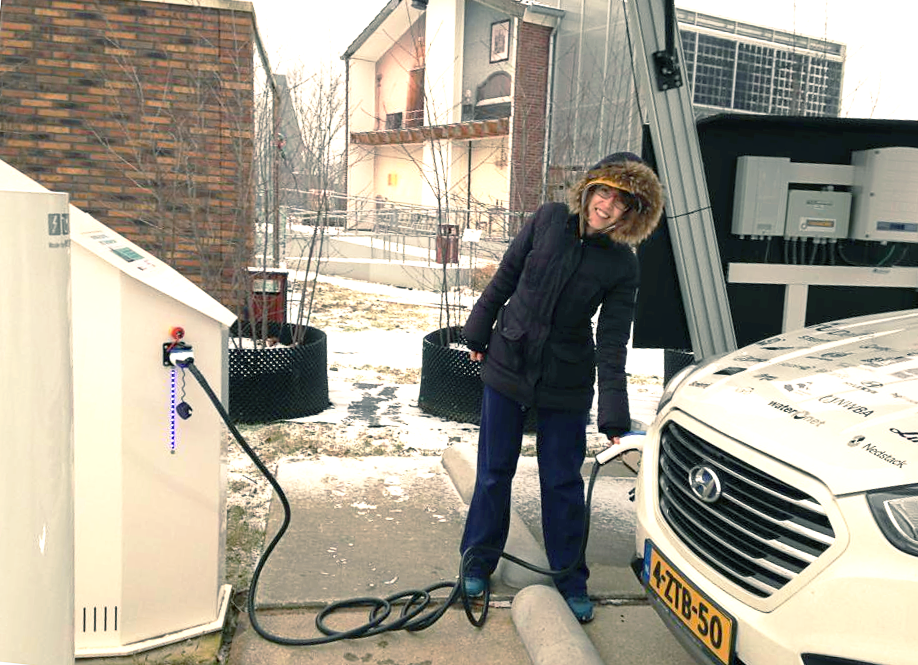 The experiment, conducted at the Delft University of Technology (TU Delft), in the Netherlands, aimed at testing the integration of fuel cell electric vehicles working in vehicle-to-grid (V2G) mode with a prosumer type residential house. For two weeks two visiting students, Francesca Abbruzzese and Anna Rojan, were encouraged to carry out their daily routine while living in the Prêt-à-Loger (PaL) house at the Green Village of TU Delft. The house is an all-electric building equipped with solar panels on the rooftops and heat pumps. Furthermore, they had at their disposal a Hyundai ix35 FCEV, which could be connected to a V2Gdischarge unit (as shown in the picture above) that allowed to deliver power back to the grid complementing the solar panels production. Solar energy can be used during the day to cover the residential energy needs, while at night, parked fuel cell cars can be used as power generators. The car was used both for mobility and power generation thus the hydrogen stored on board (approximately 5 kg) had to be enough to fulfil both purposes. Two different modes of operation were tested in total. Around 3 kg of hydrogen were consumed in V2G mode each day (see Table below).

During the first week, the car was connected in V2G at lower output, allowing it to operate for longer time with the hydrogen available in the on-board tank. On the second week, the car was connected in V2G mode at maximum power output for the V2G connection, for shorter time. The results will contribute to gain new insight to fulfil the nearly zero-energy building target set out by the European directive 2010/31/EU.

For more information related to the article, please contact:

This project has received funding from the European Union’s Horizon 2020 research and innovation programme under the ERA-Net Smart Grids plus grant agreement No 646039”, from the Netherlands Organisation for Scientific Research (NWO) and from BMVIT/BMWFW under the Energy der Zukunft programme. The European Commission is not responsible for the data published here - Copyright by CESEPS Consortium 2016 ©