Press enter to begin your search

The mass-introduction of small scale power generation units, like photovoltaic systems, in households increases the risk for system unbalances due to their stochastic generation profile. Moreover, upcoming technologies such as electric vehicles, battery storage systems or energy management systems lead to a change from traditional end-consumers to prosumers with a significant different residual load profile. Therefore, forecasting PV generation is crucial to optimize the profile of future prosumers. Whilst traditional weather forecasts are (in the case of Austria) based on a few hundred metering locations, more than 55000 PV systems are currently connected to the Austrian power grid. Due to the low areal coverage of common metering locations, weather forecasts do not take local phenomena like shadows from clouds into account. For this reason, the Austrian institute of Technology is developing an alternative to the traditional weather forecasts. The new approach uses generation data from neighbouring PV systems together with machine learning methods to achieve an individual location based intra-hour forecast.

The local generation from PV Systems is influenced by several factors that are taken into account by three different mathematical models:

Those three aspects are usually modelled independent from one another, due to their diverse nature and characteristics, they also have different effects on the power generation profile of each PV system, which can be measured directly at the inverter or grid connection point. In the past mathematical approaches were necessary to acquire information about the individual characteristics and challenges of each model. However, progresses in machine learning methods could provide a new, unified tool for the analysis of generation data with respect to local power forecasts. With machine learning methods data from distributed PV systems of a larger area can be used for generating local forecasts for individual systems.

In order to analyse the available spatial-temporal measurements of PV inverters, it is important to build a generic model that can learn from large amounts of data and find relations without explicitly given dependencies between measurement stations. Therefore, machine learning algorithms, like neural networks, are a good choice for forecasting as they directly use the time ordered structure of the data. Inputs are thereby ordered according to two dimensions: different measurement stations, which can be integrated with external data, such as daytime and wind, and time. This second dimension is handled separately by feeding multiple time steps at once.

The first results on a simplified set-up for a principal proof-of-concept yielded a positive outcome. Therefore, the next step will focus on adapting the methods on a more advanced model consisting of 25 PV systems arranged in a 5×5 grid, followed by tests under real-world conditions. 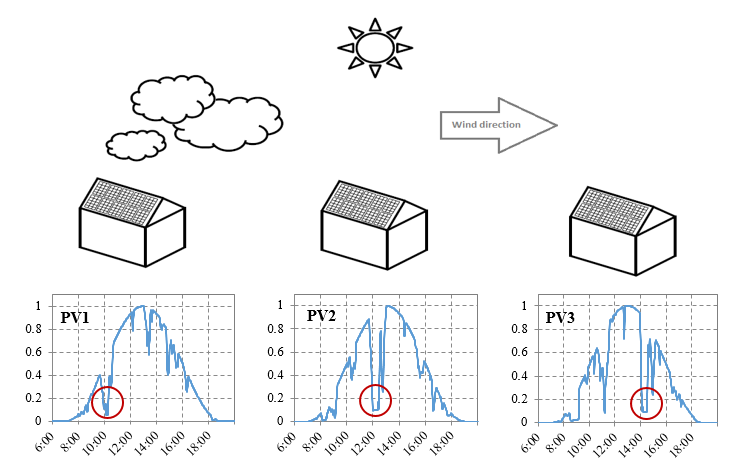 Figure 1: A simplified view on the overall concept of the inverter data based short-term forecasting method. Clouds are moving along the wind direction and are causing power drops at local systems. Data exchange between neighbouring systems and the application of machine learning methods can provide an approach for short-term local forecasts.

This project has received funding from the European Union’s Horizon 2020 research and innovation programme under the ERA-Net Smart Grids plus grant agreement No 646039”, from the Netherlands Organisation for Scientific Research (NWO) and from BMVIT/BMWFW under the Energy der Zukunft programme. The European Commission is not responsible for the data published here - Copyright by CESEPS Consortium 2016 ©